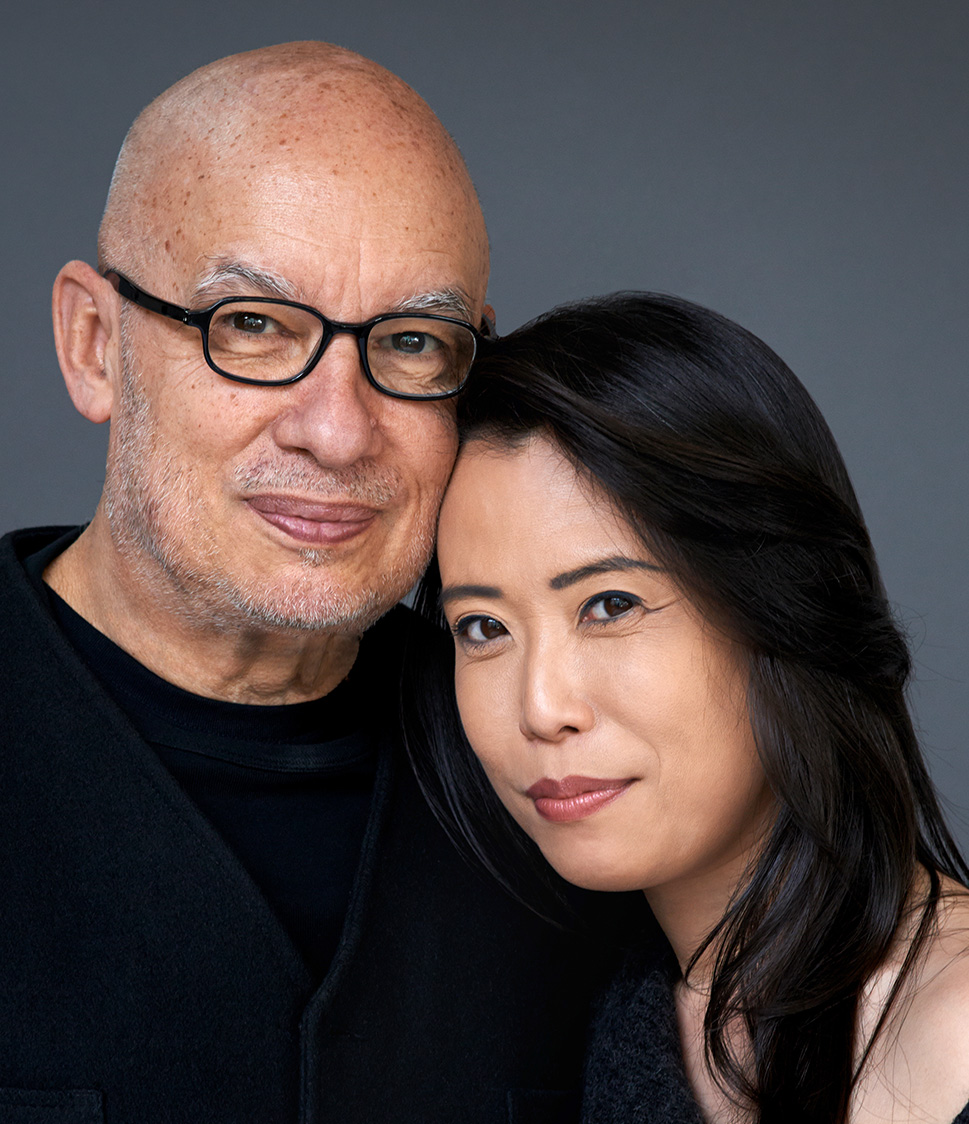 The Pianographique project grew from an initiative by Ars Electronica Festival in Linz in 2013. It comprises a series of concerts by the Japanese pianist Maki Namekawa (at Viva Musica! festival she performed alongside Philip Glass in 2015 with The Complete Piano Etudes), the American pianist and conductor Dennis Russell Davies, and the Austrian visual artist Cori O’Lan. Pianographique is about merging the art with new technologies, specifically about the visual fashioning of music which emerges in real-time, based on the interaction of music, performers and computer system. In this instance, the computer is an imaginary painter’s brush that the pianists have mastered, and thus the performance of a given composition can differ and diverge from its actual visual production with every performance. Maki Namekawa and Dennis Russell Davies have formed a piano duo since 2003. They perform regularly at prestigious venues in Europe, Japan and North America. They are among the closest partners of the American composer Philip Glass, and they regularly perform his works. At Viva Musica! festival their concert will include Glass’s Piano Sonata (Slovak premiere) and Four Movements for Two Pianos, complementing these with The Seasons by John Cage and Piano Phase by Steve Reich. The concert is held in cooperation with Ars Electronica Linz festival.

Maki Namekawa is a leading figure among today’s pianists, bringing to audiences’ attention contemporary music by international composers. As a soloist and a chamber musician equally at home in classical and repertoire of our time, she performs regularly at international venues such as Carnegie Hall and Lincoln Centre New York, Musikverein Vienna, Barbican Centre and Cadogan Hall London, Citè de la musique Paris, Philharmonie de Paris, Concertgebouw Amsterdam, BOZAR Brussels, Suntory Hall and Sumida Toriphony Hall Tokyo, Salzburg Festival, Ars Electronica Festival, Musik-Biennale Berlin, Rheingau Musik Festival and Piano-Festival Ruhr. Maki Namekawa records and performs frequently for major radio networks in Austria, Germany, the Netherlands, Switzerland, France, and USA. Orchestra engagements include Royal Concertgebouw Orkest Amsterdam, Münchner Philharmoniker, Bamberger Symphoniker, Dresdner Philharmonie, Bruckner Orchester Linz, Sinfonieorchester Basel, Filharmonie Brno, American Composers Orchestra, and Seattle Symphony. In 2013, she performed the world premiere of the entire cycle of Philip Glass’ 20 etudes for piano solo at Perth International Arts Festival under the participation of Glass himself, followed by concerts around the world in the US, Mexico, Brazil, Ireland, Scotland, Iceland, Sweden, Finland, Denmark, Slovakia, Poland, Germany, and Japan. A double-CD of the complete Glass etudes has been released in 2014 by Orange Mountain Music, reaching number 1 of the iTunes Classic charts and receiving high praise in the categories “Performance” and “Recording” by BBC Music Magazine. In September 2017 Maki Namekawa presented the whole cycle of Glass etudes for the first time in Austria at the Ars Electronica Festival as a project Pianographique with real-time visualizations by Cori O‘Lan. In September 2018, Maki Namekawa released the piano version of Philip Glass’ soundtrack Mishima: A Life in Four Chapters that depicts the life and death of the Japanese writer and political activist Yukio Mishima. The arrangement was especially crafted for her by Glass’ long-term musical director Michael Riesman and features her crystal-clear technique. The recording was awarded the prestigious Pasticcio Prize by ORF – Austrian National Radio Broadcast. In June 2019, her another recording Isang Yun | Sunrise Falling was awarded Pasticcio Prize again. In 2019 Philip Glass composed his first Piano Sonata especially for Maki Namekawa. She premiered the Sonata on July 4th, 2019, at Piano-Festival Ruhr in Germany in the presence of the composer. This Piano Sonata was commissioned by the Piano-Festival Ruhr, the Philharmonie de Paris and the Ars Electronica Festival. Together with her husband, the conductor Dennis Russell Davies, Maki Namekawa formed a piano duo in 2003 which regularly performs in leading venues in Europe, Japan, and North America. Major works written for the Namekawa-Davies Duo include Philip Glass’ Four Movements for Two Pianos, Chen Yi’s China West Suite, and Glass’ Two Movements for Four Pianos (with Katia and Marielle Labèque) all commissioned by the Piano Festival Ruhr. In July 2017, Maki Namekawa, Dennis Russell Davies, and Philip Glass received the Piano Festival Ruhr Award. In 2019 Japanese composer Joe Hisaishi composed for the Namekawa-Davies Duo a work for two pianos and chamber orchestra Variation 57, premiered in Tokyo under the baton of the composer. Maki Namekawa studied piano at Kunitachi Conservatory in Tokyo with Mikio Ikezawa and Henriette Puig-Roget. In 1994 she won the Leonid Kreutzer Prize. In 1995 she continued her studies with Werner Genuit and Kaya Han at Musikhochschule Karlsruhe, where she completed her diploma as a soloist with special distinction. She went on to perfect her artistry in Classical-Romantic repertoire with Edith Picht-Axenfeld, in contemporary music with Pierre-Laurent Aimard at Musikhochschule Köln, György Kurtág, Stefan Litwin and Florent Boffard.

Cori O'Lan has worked at the crossroads of art and technology since the late 1980s. His most recent work is focusing on live, computer-generated visualizations of orchestral and piano music. Through a longstanding collaboration with the Ars Electronica Futurelab, pianist Maki Namekawa and conductor Dennis Russel Davies, he has developed a unique style of ‘accompanying visualizations', working with and elaborating on the music as it is performed, in real time, to create unique, one-of-a-kind visual interpretations. In these accompanying and responsive real-time visualisations, each individual graphic element is derived directly from the acoustic material – that is, from the qualities of the music itself as it is performed by the pianists. To achieve this, the sounds produced by the pianos are picked up by microphones. These signals are then transformed by a computer into thousands of data points, drawing on musical elements including frequency, pitch, volume, and dynamics. This information, in turn, is used to control the graphics computer, which creates, modifies, and animates the different graphic elements that together make up the visualisation. The live nature of this process ensures there is a direct and deeply expressive connection between the musical and visual experiences. With these visual interpretations, O'Lan seeks to go beyond a direct mechanical translation of sound into image. Instead, he sets out to create a living, organic visual entity which has its own nature and behaviour, drawing on the characteristics of the music, while simultaneously 'listening' to and responding to the music as it is performed. These visual-concert projects have been performed in New York, Los Angeles, Tokyo, Osaka, Abu Dhabi, Brussels and of course at Ars Electronica Linz.